NEXT GEN DEVOPS: Creating the DevOps Organisation is getting a second edition!

I’ve been working on it for a while but it’s been my sole focus since I published the NEXT GEN DEVOPS TRANSFORMATION FRAMEWORK.

The first edition came out around a year ago and a lot has changed since then.

The conversation now seems to be how organisations should approach DevOps rather than whether they should consider it. Friends and I are now talking about dropping the term DevOps because we feel it’s just good software engineering practice. Patterns that I dimly glimpsed two years ago are now clearly defined and have several supporting case studies.

The core theme of the book hasn’t changed. In fact none of the existing content has changed at all. I’ve corrected a few formatting mistakes here and there and I’ve been able to add some great photo’s that I think really bring the history chapter to life. Everyone who’s spoken to me about the book has commented that it’s their favourite chapter and now it’s even better! 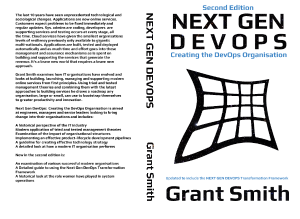 Apart from a redesigned cover I’ve added several new chapters the first of which is entitled The only successful DevOps model is product-centric which looks at the four organisations that are most frequently held up as DevOps exemplars Etsy, Netflix, Facebook and Amazon to see what they have in common and what lessons other organisations can learn from their successes and failures. I wrote this chapter to address a comment I’ve heard from several readers that they wanted more explicit instructions about how to transform their teams and organisations.

That’s also the reason I added the next new chapter: The Next Gen DevOps Transformation Framework this chapter provides explicit instructions describing how my DevOps Transformation Framework can be used to transition a business towards DevOps working practices. It impossible to re-format a framework designed to be used interactively on an HD screen to a 6×9″ paperback but I’ve been able to provide some supporting contextual information as well as providing some example implementations. This combined with the Playfish case-studies I’ve published here on the blog should provide people with everything they need to begin their journey to DevOps.

The final bit of new content is an appendix to the history chapter. I learned a lot while I was researching the history chapter, far more than I could include without completing losing the thread of the chapter. What interested me most of all was the enormous role played by women in the development of the IT profession. I’ve worked with some great men and women in my 20 years in IT but I’ve only met two female Operations Engineers. Where are the rest? At Playfish I worked with a lot of female developers but whenever I was hiring I never met any women interested in careers in Operations. I couldn’t shake the thought that something was wrong with this situation. Over the past year I’ve read a lot about the declining numbers of women in IT so I decided to share what I learned while writing the history chapter and do a little research of my own.

I need to eat some humble pie now. I think I made a mistake when I initially priced the book. When I was writing the book my focus was not on book sales. I know a couple of people who have authored and co-authored books and read numerous articles about how writing will not make you rich so I was under no illusions about my future wealth. I chose the price because I felt that it would lend credibility.

I didn’t factor in that ebooks and self-publishing has changed the market. When I published the book Amazon displayed a little graph demonstrating that $9.99 was a sweet spot for pricing and that I’d make more money publishing at that price. I’m not doing this for the money so what do I care?

That’s where I made a mistake. I don’t care about the money but I do want my message to get out. I think my book is unique because very few authors have spent 17 years operating online services and very few authors had the unique opportunity to work on one of the first examples of continuous delivery.

I can’t update the paperback version and I can’t give them away for free but I do have a plan. I’m going to be publishing a PDF edition of the second edition and selling it through my own online store. I can’t get details of who bought my book so I’m going to do my best to operate an honour system. If you bought a paperback version of Next Gen DevOps and want a PDF copy of the second edition email grant@nextgendevops.com and I’ll send you the PDF version.

While I don’t know who has bought paperbacks I do know how many paperbacks I’ve sold so once I’ve given away that many PDF copies the giveaway will be over so email me asap to ensure you get your free copy.

The second edition will be published in the next couple of weeks and will be accompanied by a formal press-release.